This was quite a big family; yet as was rather common in those days, several died young, and others had no children.

Harriet Augusta “Hattie” (1852- 1887)    Hattie married Ervin Simmons in 1872 and had a daughter Harriet in 1874 who was raised by her grandmother Elizabeth, later in Hammond Louisiana.  There seems to be no trace of Ervin or Harriet Simmons after 1870 except for Harriet’s death in 1887.  Harriet Simmons the daughter, always called Hattie, married Otis Gallup and had 4 children, two of which died young, and four grandchildren who seem to have lived mostly in Louisiana. 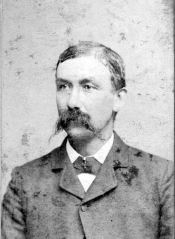 
Charles Freeman (1857 -1930)  Charles set up a jewelry and watch repair store on the main street of Wakefield.  He married a young woman, an immigrant from Denmark, named Wilhelmina Helvig.  They were a well-matched couple; he had his watch and watch repair business, and his wife operated a business down the street selling fine china, glassware, some jewelry.

Charles was also a sportsman – had several fine shotguns.  They had two daughters,  May and Irene; and then two sons, Walter and Carl.  May and Irene each had several children; May with five daughters and a son, Irene with five sons. Walter was briefly married to a young woman who left him, taking their little daughter, about 1922.


Nettie C (1860 – 1922)  Nettie married Will Paul about 1882; Hattie Simmons remembered him thus: “I remember the first time I saw your father; we had just moved to Wakefield. I looked out the window. There came a man up the St. with a green suit, & the brightest

green tie I had ever seen, also one of those funny squatty hats. I was 9 then but thought he looked funny.  In a short time he was coming to see your mother. We all liked him in spite of his funny looking clothes..”  “Uncle” Will Paul was kind of a promoter – he spent a lot of time popularizing the date (he started a date garden near Indio, on Ave 56 – a bit remains in the family.)  He had a sort of farm in Mexico, he did other things.  He was never hugely successful but was one of those people, I think, who thought that the big score was right around the corner.  He and Nettie had two children; Lawrence “Laurie” Paul and Nina.  Laurie had a bunch of children, Nina only one, who died very young.  Nina later married her first cousin Percy Stevens Shumway.   Nettie always looked frail and Nina was of the opinion  that her father hadn’t taken good care of her mother.  Laurie Paul’s large family has been mentioned, and he borrowed quite a lot of money from his father- debts which his father kept track of – so after Will Paul died in 1933 there was not enough money left to settle matters and so Jerome Burnett, Ruth Shumway’s husband, offered to buy a portion of the date ranch (called Rancho Esperanza).  As one might expect, resentment built up over a variety of issues, leading to unpleasantness. 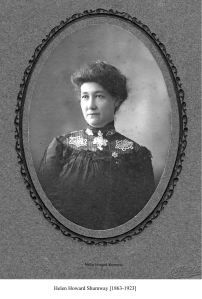 Nellie was the most retiring of the sisters – she didn’t have a lot of sympathy for Herbert’s aspirations,  A few years after Herbert’s 1918 death she moved to Riverside, California after having spent some time around Indio, CA with her sons.  Her niece Nina said that she was a whiner but it seems to me that she had a right to more support and encouragement from her children.  She lived for some months in Riverside with her daughter Ruth and Ruth’s children.  I have a picture of her with little Helen (my mother) and one with new grandson Jerry, born in March 1923.  My mother came home from kindergarten one day in April and said, “where’s Grandma?”  But she had died in the night. [More about Herbert and Nellie Shumway]

Edith Lorena (1866-1936) was the most beautiful of the girls, made the “best” marriage, and was the saddest of them all.

In 1889 she married Charles Cleveland Letts, and in 1900 they were living in Chicago where Charles was a wholesale merchant; by this time Edith had two children; an idolized son Charles Howard Letts, and daughter Olive.

In 1910 we find the family in Pasadena, California  in what is now Arcadia, right next to the Santa Anita Race Track, but they apparently moved quite soon to Palo Alto, California, for Charles there formed a relationship with a young woman, Diana Fogarty, who in 1912 gave birth to a little girl they named Charlotte Letts.  We don’t know if Charles and Diana ever actually married; but young Charles 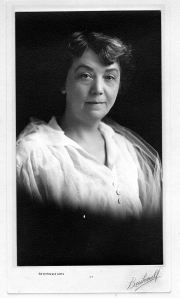 became estranged from his father, drifted, got into trouble, spent time in jail, and may have been shot by the police, maybe in Los Angeles.  Edith separated from her husband and moved to Sierra Madre, California with her “adopted son” Jimmy White.  In 1930 she and Jimmy White were living in Mecca, California.  She died in 1936 of cancer.

1 thought on “More about the Martin Freeman Howard family”