Jeremiah Shumway and Mary Maria Paine married 24 Jul 1852 in Worcester, Massachusetts, and the next year their first child, Viola Paine Shumway was born in Pascoag, Rhode Island.   But by that time the four youngest Paine children (Sarah, Duty, Mary Maria and James Munroe), their spouses and children were planning on moving west, to Minnesota. In 1854 the four men went west to inspect the land, and in 1855 they and their families arrived in their new home, which was soon called Portland Prairie.  They stayed for a time in a one-room house over the state line in Allamakee Co., Iowa.  In spite of storms, drought, financial hard times and the fear of attack by discontented Sioux, the immigrants prospered, and more relatives came as well as unrelated  people from Rhode Island, Maine and Massachusetts..

The family did well; Jerry Shumway was a competent carpenter, and built a cabin. 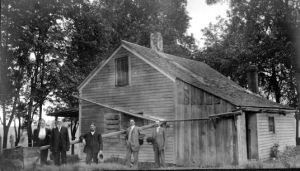 This 1909 photo shows the Albee’s first frame cabin. The original size was 16 by 20 feet (a later lean-to and porch enlarged it ). The flumes led from the roof to conduct rainwater to a cistern. Seen l to r are Viola Shumway Cass, Jerry Shumway, Martin Leroy, Edmund and Herbert Shumway.

But he also seems to have had a knack for business.  In Fremont Everett’s book  ‘Some of the Everetts’ he observed “[Jerry] dealt in livestock and took a mail contract from the government.  His friends used to say of him, ‘Jerry makes more money off the farm than he does on it.'”

The Shumways had more children: Herbert Paine in 1856, Mary Evelyn (Eva) in 1858, Edgar Edmund (always called Edmund) in 1862, and Charles Oscar in 1864.  But this was the time, of course, of the Civil War, and in 1864 Jerry was drafted.   He was a sharpshooter in the 5th Minnesota Infantry, and wrote a series of letters (Letters from the Civil War) which are a real treasure, full of concern, cheer, and loving advice for his wife and  children.

On his return home in late 1865, Jerry found many families had moved or were planning on moving west to Nebraska or Dakota Territory.  But Jerry and his family stayed put. He and Mary had Lorin George in 1868 and in 1870 he built a house which still stands. 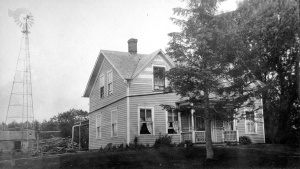 The family welcomed another little boy, Joseph Arthur in 1870, though this son died in early childhood; and in the same year the Portland Prairie Methodist Episcopal Church was built, next to the cemetery which had been established in the early days of settlement. 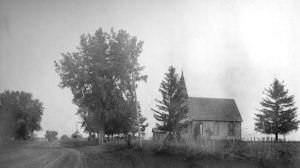 In about 1880 the Shumway family moved to Lyons, Burt Co., Nebraska.  Friends and relatives which had moved earlier welcomed them and Jerry established several businesses operated by his older sons.  He and Mary were supporters of the Methodist Church and Jerry was active in the GAR (Grand Army of the Republic) 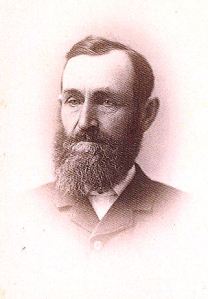 Over the years Mary Paine Shumway’s health began to fail – perhaps bronchitis, perhaps diabetes.  She spent some winters in Pasadena, California.  Some interesting letters survive.  A wonderful picture exists of the Shumway family taken about 1892. 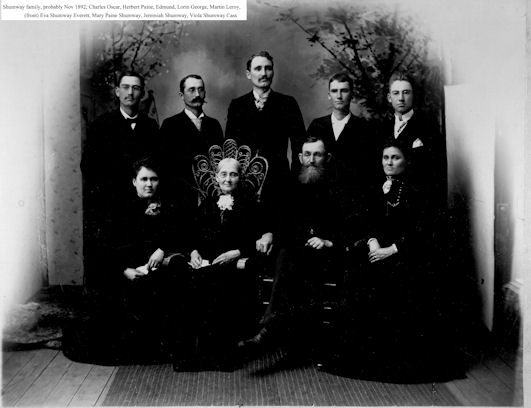 The Shumway Family about 1892

Mary Shumway passed away August 19, 1898. (see Obituaries)  But the family continued to grow, this time with grandchildren. 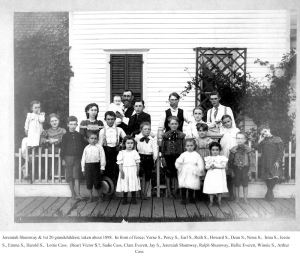 Jeremiah continued to be active, traveling to visit relatives and being fully occupied in operating several tool and lumber businesses. He had an extensive correspondence with his family, especially Herbert.  He stayed involved in the GAR and went to Portland Prairie a number of times.  We have superb photos of his 1909 visit, made to celebrate the 50th Wedding Anniversary of his brother Rufus and wife Hannah.  Nine of his grandsons saw service in World War I. 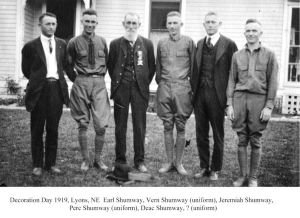 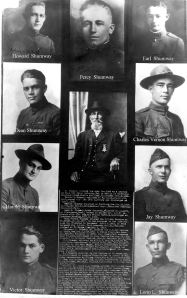 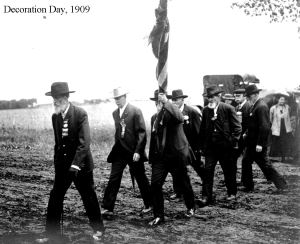 Jeremiah passed away 15 Oct 1927 In Lyons, aged 94.  He had outlived his siblings, his contemporaries, and several of his children.

His obituary is found at Obituaries.

Links found on this page

Letters from the Civil War

Grand Army of the Republic