Portland Prairie is a region in southeastern Minnesota and northeastern Iowa which never glaciated, so it is somewhat hilly and quite different from most of Minnesota and Iowa.  The prairie was especially desireable for farmers as there were few trees to be cut down.  The region was settled about 1855 by a number of families, most related to each other, from Rhode Island and Massachusetts.

This from Arnold’s “Old Times of Portland Prairie, ” John Edger and three other Irishmen located in Section 32, Wilmington township, in 1852, where Edger broke 23 acres, but he soon moved his location to the southeast corner of Section 36 where he built a log cabin about 14 by 16 feet. None of the party remained long in the township ere they sold their holdings and left.

The first Rhode Island settlers to locate on Portland Prairie came in the spring of 1854. These were James M. and Duty S. Paine, Charles F. Albee and Jeremiah Shumway. They bought out John Edger and occupied his log cabin until they could establish themselves on places of their own. … The four men named were still young and all married, but at first had left their wives in the east. The Paines were brothers and the other two had married sisters of the Paine brothers.

The Paines located on lands in Section 31, Wilmington, or on what is now the Schultze place. J. Shumway remained on the John Edger claim, having land on both sides of the state line. For the present C.F. Albee lived in the Edger cabin with the Shumway family and worked at building the few frame houses that were put up that year, the lumber being teamed from Lansing. It is said that at one time the log cabin sheltered sixteen inmates which included small children and infants. Mrs. Sarah Albee, wife of C.F. Albee, came out to Minnesota in the summer of 1854 with her two children that were born at the east.” 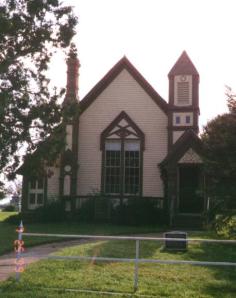 The settlers started a Methodist Episcopal congregation in about 1855, and in 1875 built a churchon Portland Prairie Road; the church has a small cemetery where many originalsettlers and their descendants lie. 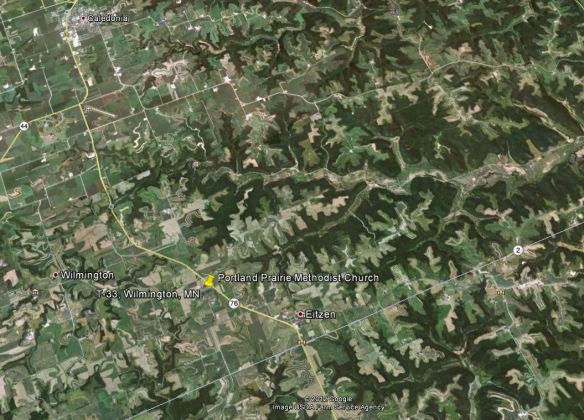 While many of the families left the Prairie within a few years – some during the Civil War,  more in the 1870’s and 1880’s,  a surprising affection remains and people from far away  come on the last Sunday of July to attend a church service, sing hymns, and share a potluck lunch.