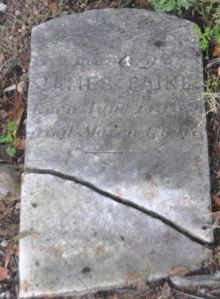 She was born on 31 Mar 1793 in Smithfield and died on 10 Sep 1842 in Burrillville. Both James and Mary were buried in the Albee-Paine Cemetery    (Burrillville Cemetery #6) next to their home.

James Paine and Mary Sayles had the following children: ( If you would like more detailed information and sources go to this link – .James Paine Long DescendantReport)

Sarah Paine was born on 08 Aug 1825 in Smithfield.  She taught school in Massachusetts, and married Charles Fenner Albee on 22 Apr 1847 in Thompson, Windham Co., Connecticut.  Charles was a son of  William and

Charlotte Wood Albee who also are buried in the Albee-Paine Cemetery.  The family moved in about 1855 to Portland Prairie, Minnesota, Sarah living until 21 Aug 1909; she is buried next to the Portland Prairie Methodist Episcopal Church.

Duty Sayles Paine was born on 01 Feb 1830 in Burrillville (actually Pascoag, a town in Burrillville township), and moved west with his sister Sarah Paine Albee, sister Mary Maria Paine Shumway, and brother James Munroe Paine.  He married twice, to sisters Sarah Maria Cook and Mary Gerry Cook. He died on 02 Apr 1925 in Forsyth, Rosebud Co., Montana. An interesting sideline – Sarah and Mary were of course born in Nova Scotia, but the Cooks were a Loyalist family, originally from Massachusetts but moving to Canada after the Revolution.

Mary Maria Paine was born on 28 Jul 1832 in Pascoag, and married Jeremiah Shumway ,son of Noah Shumway and Pamela Aldrich, on 24 July 1852 in Worcester, Massachusetts.

RETURN to The Shumway Family in Massachusetts

GO ON to Portland Prairie – the Rhode Island Migration