Fremont Everett was born in Allamakee Co.,Iowa in 1855; his father Franklin was a successful farmer and investor.  Franklin moved his family to Lyons, Burt Co., Nebraska about 1868;  but Fremont apparently visited Portland Prairie fairly frequently – often enough that Fremont and Eva Shumway married in 1877 in the Portland Prairie Methodist Episcopal Church; relatives said Eva “was sold,” certainly it did not begin as a love match but as a prudent choice, strongly encouraged by her father. 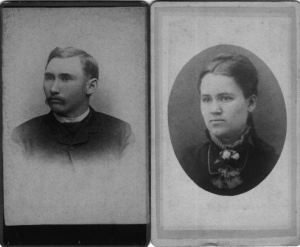 In Lyons, Fremont was employed as a lawyer and business person.  The couple had two children; Harold (Hallie) in 1880 and Clara in 1884.  Eva was involved in Methodist Church activities in Lyons, “Mont”  was close to Herbert Shumway, who was quite successful, having a thriving business in Wakefield and being active in politics.  The two of them, and other members of the Everett and Shumway families, were involved in the Mexican Railroad enterprise

Fremont, Eva and daughter Clara visited Mexico more than once, as a number of very readable letters attest.  Everett was an enthusiastic traveler  apparently wide open to new experience, and wrote quite well (in addition to interesting letters he wrote and had printed “Some of the Everetts,” a book about his ancestors, nieces, nephews and other relatives He  was moderately successful as an attorney and businessman, but seems not to have been highly regarded by his family, or perhaps was too trusting.

This from an Everett-Shumway connection by Dean Lobaugh    … An event about this time greatly influenced the family destiny – [it] was a trip to Portland, Oregon, in the summer of 1905, by Fremont and Mary Evelyn. The occasion was an exposition celebrating the centennial of the Lewis and Clark expedition, and during this trip Fremont became excited about the possibilities in the lumber business in the Northwest. The upshot of this interest was that a year later the Everetts, the young Merewethers [Clara, her husband Edward, and daughter Eleanor), and the Charles Shumway family had settled in Oregon. Fremont and Charles, along with uncle Herbert Shumway who remained in Nebraska, bought and began to operate the Sheridan Lumber Company, a sizeable logging and milling operation on Mill Creek near Sheridan and Willamina, Oregon, an area with which the family is identified to this day. It happens that grandfather Franklin Everett, remaining in Nebraska, invested in the Sheridan business. The Fremont Everetts first lived on the west side of Portland; I am not sure how Fremont participated in the lumbering operations, except for general oversight, for the mill property was about sixty miles from Portland, and those were still pre-automobile days for most people. It appears that Uncle Charles Shumway and his family lived in the town of Sheridan, but that Edward and Clara and the baby lived at the logging camp. Edward had obviously given up his pursuit of a mining engineering degree at Golden [Colorado], and had, presumably, settled in Lyons after the honeymoon. Sometime before 1910 Fremont and Mary Evelyn bought a home on the east side of Portland, on Stark Street near 20th. It was a substantial, two-story home where Eleanor’s childhood and youth were identified, for when she was two years old she became a member of her grandparents’ household. For reasons some of which can only be guessed at, a family decision was made to give the little girl to her grandparents, who would adopt her as their own. … there has been a suggestion that there may have been some kind of financial arrangement. … In 1915 the Sheridan Lumber Company was apparently still in full operation; Fremont Merewether (elder son of Edward Merewether and Clara Everett) says that his earliest memory is of living at the Mill Creek logging camp. … In 1917 Fremont Everett bought a farm and mill, complete with cookhouse, bunkhouses, and mill pond, on Gold Creek, west of Willamina, and Frank Edwards was brought back from Washington to take charge. There was a good farm house and farm buildings serving several acres of bottom land, but until possession of the house could be secured a place in the neighborhood was rented. In 1918 the house … was occupied, but the major interest was in the logging and milling of the considerable stand of timber on the hills within the property. [Probably] by this time the Sheridan logging and milling operations had been disposed of, though the retail lumber yard in Sheridan remained in the family until 1928. (Franklin Everett says that his father told him that great-grandfather Franklin took his money out of the Sheridan firm, an obvious sign that matters were not going well.) … I am not certain, …` just what was the sequence of their grandfather’s business ventures following the closing out of the Sheridan mill operations. I am inclined to think that it was during the war years and the early twenties that he was a lumber broker with a partner, in Portland. This apparently was to prove a losing venture; family wisdom has it that he was cheated by a Mr. Cutler, his partner. However, he was certainly not wiped out in this enterprise, and about 1913 his father Franklin’s death brought him an inheritance that may have been as much as $200,000. He felt himself now ready for grander things in the lumber business. He invested heavily – presumably with a single partner – in a big sawmill at Tillamook, Oregon, and to bring the story quickly to the point, he failed – was wiped out. The causes for the failure were no doubt complex – he may have again been “cheated” by his partner, there may have been mismanagement, or the lumber business may have undergone a serious slump at that time. But Frank Edwards once said to me that around the lumber camps and mills Fremont Everett was known to be an “easy mark,” and it is the family consensus that he was never a business man, in spite of early successes; he was basically idealistic and trusting by nature. The failure occurred in 1924 … Fremont lost nearly everything. What financial transactions took place following the loss of the mill we do not know, but what is known is that by the time Mary Evelyn wrote her will in 1926, all family assets were in her name. … in the spring of 1926, Fremont was operating the retail lumber yard in Sheridan, living on the premises during the week, and spending the weekends in Portland. He was then 70.

Fremont and Eva made do (I believe that Eva inherited some money on her father’s 1921 death) but in 1927 she was struck by a car and died a few days later, on the 17th of October. Fremont drifted; in the 1930 Census we find him living with his daughter Clara, her second husband Frank Edwards, and their children at the Gold Creek ranch. He had been corresponding with – and sending expensive gifts to – Emma Coberly Shumway, the widow of his late brother-in-law Edmund.  He traveled to Denver, where she lived, and they married in 1936; sadly, he died late in the same year, and Emma resumed the Shumway surname.

There are Obituaries for Fremont, Eva, and other family members.

Go Back to the Index