Herbert Paine Shumway was raised on the family farm in Houston Co., Minnesota. When he was a little boy his father wrote of him “Herbert … requires a good deal different management from any of the others. He is very sensitive, would take as a slight what the other children would not think of and he is very tender hearted; anyone if they are only kind to him can get him to do almost anything. I do not think you need to be afraid of his getting too good of an opinion of himself. Learn [teach?]  him to think he is just as good as anyone then he will not think so much about being slighted, and he will learn to rely on his own judgement.  …  . To sum it all up I think he has your disposition. If you think you [Herbert’s mother] have any faults try to correct them in him; only he is a boy, will be a man if he lives and I want him to learn to act and thin 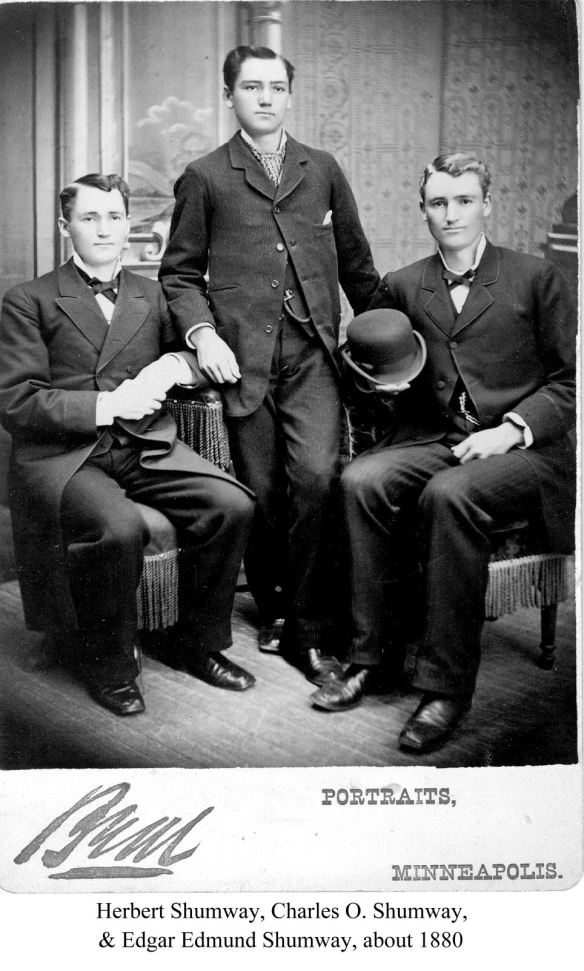 k for himself and not to be easily lead about by smooth words.” Herbert seems to have had a hunger for experience and knowledge shown in the letters which survive – in 1875 he taught school in Nebraska to save money for his education; then he returned to Minnesota (I think as a native he had a right to tuition-free education) and went to the University, earning his Bachelor of Science degree in 1882.  But even before that he had entered into the lumber-yard business in Wakefield, Nebraska, with his brother-in-law Fremont Everett. The next year he met and married Helen (Nellie) Howard, whose mother had moved to Wakefield after the death of Nellie’s father in 1883. Herbert and Nellie went on a GAR Excursion Trip to California and Oregon in 1886.  Herbert was active in several kinds of business, including the Mexican Railroad scheme, and the lumber industry in Oregon.  But he had wider interests – he bred Great Danes and played whist, and he liked to hunt.  He collected – The Wakefield Historical Society has a large collection, donated after Herbert’s death, of firearms and Indian regalia, pipes, clothes and so on. According to Herbert’s obituary, he took an “active interest in all public affairs connected with good citizenship. He served three terms in the State Senate, 1891-92, 1913-14 and 1915-16. In 1894 he all but received the nomination for Lieutenant Governor, which distinction he actually did achieve in 1916, and would undoubtedly have been elected to the second office in the state in that year but for the Wilson landslide which carried with the President all the high offices in the state. He was a Colonel on the staff of Governor Crounse 1893-4, on the staff of Governor Mickey 1903-4-5-6 and on the staff of Governor Sheldon in 1907-9; was President of Nebraska and Iowa Implement Dealers’ Association in 1902, and Vice-President of the National Association in 1903.  …  He was interested in Masonry, being a Knight Templar and a Shriner, and was the past Worshipful Master of his home Blue Lodge at Wakefield. For nearly thirty years he was a member of the Wakefield school board, and for many years a village trustee, also for over thirty years a trustee of the Methodist Episcopal Church. He was for many years an Odd Fellow, and was also a member of the A. O. U.W. [Ancient Order of United Workmen] and the M. W. A.”

Nellie Shumway, unlike Herbert, was a shy and retiring person who had little interest in Herbert’s political aspirations. At least one of their children said that their bickering turned him, and maybe his brothers, against marriage.  Until her 1898 death Herbert’s mother was his biggest supporter, encouraging him in politics. Herbert developed diabetes, a disease common in the family, and retired from business in 1907.  He was bitterly disappointed at his failure to do more. He died in June of 1918 of tuberculosis which attacked his diabetes-weakened body

“The Mexican Railroad” – Letters and narrations about a family business venturex